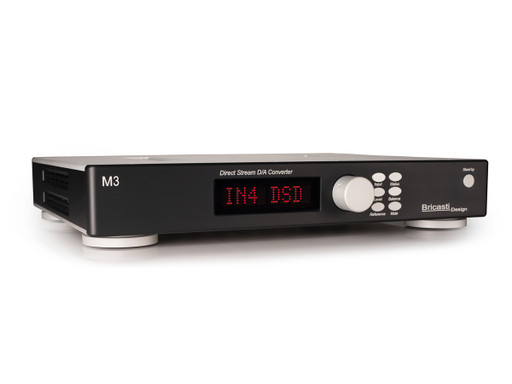 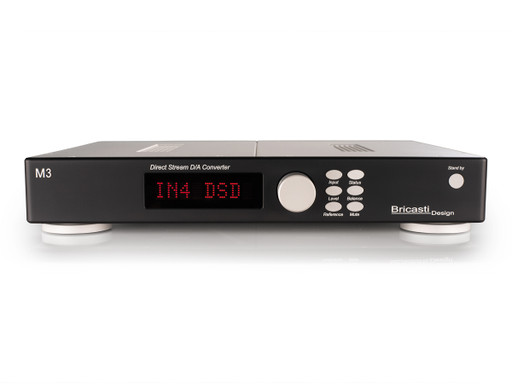 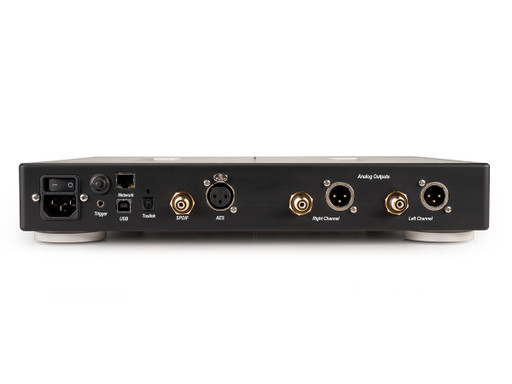 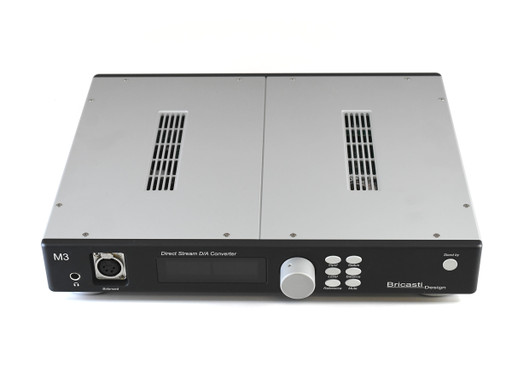 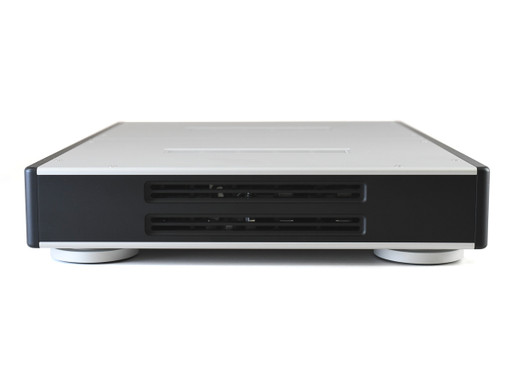 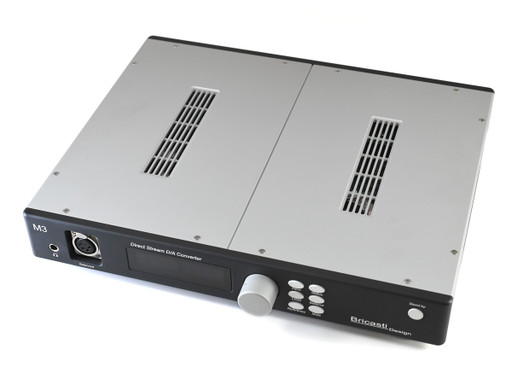 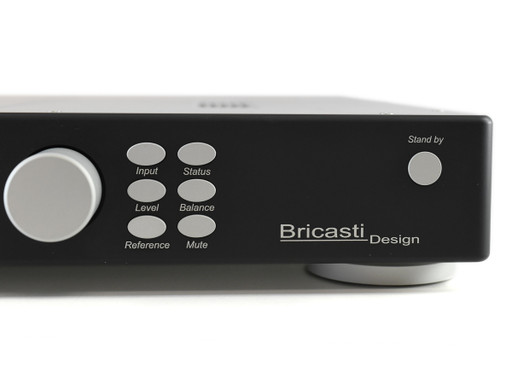 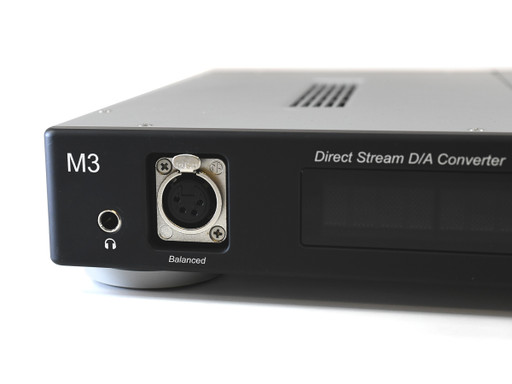 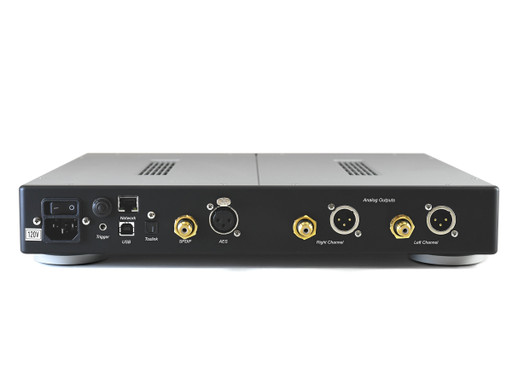 The M3H adds a headphone amplifier option with balanced inputs for expanded utility in your audio system.

The M3 offers an incredible array of performance in a more affordable price class. Highlights include two fully differential conversion channels, separate conversion for PCM and native DSD, and a balanced analog level control circuit, making the M3 suitable for all applications.

Re-creating sound is an art and a science

The M3 was designed from the beginning to have a headphone buffer and driver amps to be added as options, so the chassis and dimensions remain the same on the M3H except for the front panel. There, you will find 2 connection points for an XLR and 1/4" inputs. There is no change in the DAC components of the device, but there are additional driver cards inside the unit.

The M3 is a true balanced or differential DAC, and all its analog circuitry is fully balanced including the headphone driver amps. There are 4 amps in the M3H for headphone drive when using balanced out. It is unique in the market to have a full balanced path.

Since the M3 is analog, there is no change in the UI of the unit or controlling level. Bricasti will be adding the ability to select the different outputs: Headphone or main outputs on the device.

The M3 features 2 fully differential conversion channels, each with its own D/A converter, and analog level control circuitry. With Bricasti’s twin DAC design, the dynamic range for each channel is optimized by using the stereo ADI 1955 D/A converters in a mono configuration for PCM conversion, clocking is implemented with a technique called DDS (direct digital synthesis) which takes clock induced jitter to immeasurable levels. DSD is converted with a proprietary one-bit analog converter.

The intention of the M3 is to provide a state-of-the-art design, utilizing the best designs and materials that can be found today. The converter and following analog stages are a very critical part of the digital and analog audio chain. The sound of the M3 is intended to be transparent and revealing, and fully dynamic. This in part is made possible by lowering the jitter to extremely low levels, providing a pure digital signal chain without sample rate converters, superior digital filter design, pure DSD conversion, coupled to a fast, transparent analog signal path with analog level control, discrete analog output section and plenty of good clean linear power for optimum analog performance.

Many hours of listening were done to tune the M3 to an exacting sound, with all types of music, and with extensive testing done in the studio and in the home. We hope you find the M3 to be pleasing and enjoyable to hear and use in the home or as a precision tool for high-level reference monitoring for the professional.

Depending on options, it provides 4 or 5 digital inputs selectable from the front panel. This section has its own linear power supply and is isolated from the analog section. Features and Analog Devices Sharc DSP that used to run:

The rear panel has a stereo connection (TRS) for the trigger out of M3, used to place an external device like the Bricasti M15 power amp into standby. Trigger functions can be set in the status menu for trigger-in, trigger-out, or trigger-remote for exclusive operation and control from the M20 preamp.

Handcrafted in the USA

All of Bricasti's products are crafted in the old world tradition, in a classic brick mill building in Massachusetts USA by a team of individuals dedicated to excellence.

The basis for M3 starts with the same proven design we made for the M1 D/A converter; a dual-mono signal path and a fully true balanced topology based on dual ADI 1955 converters, all linear power supplies, and a separate digital signal processing engine taken from the M1. Based on this proven design the next product we made was the M12, this is essentially the M1 with the addition of a discreet ladder analog level control which allowed us to develop our native DSD conversion. This then followed with the M21, a stand-alone DAC version of the M12 which included the NDSD conversion from the M12 also with an analog attenuation stage to manage the DSD.

Continuing the evolution of the M21 design work became the basis for the M3. A bit about our true DSD conversion In the M12 design, we had an idea to create a true DSD converter, in simple terms this is a very high-speed switch, up to 10GHz, followed by a low order analog filter. The problem presented in processing and converting DSD is that if one is to maintain true DSD then no digital signal processing can be done. Thereby most all converters convert DSD to multi-bit or PCM format, and once converted that allows for management of the playback for level matching, muting of transition noises are all simple and cost-effectively done in the digital domain, but the conversion is now PCM not a true DSD one. In the M12 we solved this by performing all these background tasks in the analog domain with our programmable level control. All the signal processing is elegantly done in the analog domain, transitions from PCM to DSD are silent and level matched. In the M12 this is a costly way to convert DSD, so when making the M3 we had to find a more cost-effective way to manage the analog signals and deliver NDSD. This technique was brought forward into the M21 and then the M3 for true DSD conversion.

Conversion in the M3

The M3 features 2 digital audio conversion paths, 1 for PCM which utilizes a sigma-delta type as found in the M1, and one for DSD, a true one-bit modulator of our own design and unique to the industry. This DSD conversion is a true 1-bit analog converter followed by an analog post noise filter. The result is a pure DSD playback unlike any other converter in the market. Both converters create a true differential analog waveform from the digital data stream, and as in the M1, the M3 also employs a discrete current to voltage conversion stage to create the true balanced signal.

As stated above, the M3 is a true balanced converter and the complete analog path and its attenuator are also true differentials. As in the M1, the M3’s unbalanced outputs are separately buffered allowing for use of both outputs at the same time to drive different amplifiers or preamps. A common use is to use one for driving a subwoofer and the other for a main speaker amp drive. The M3 has a robust linear analog power supply with voltage rails of +15V and -15V, therefore the M3 can be used to drive the power amps directly with no issue of available current. The M3 utilizes the same analog attenuator as the M21, this was chosen in the M21 and M3 for its small footprint and low power consumption. This attenuator has a dual function in the M3, one for managing the NDSD conversion path and the other is the ability to use the M3 as a preamp source, to direct drive the power amps or headphones The M3H - Delivering a True Balanced Source The M3 has the option for a balanced headphone driver, called the M3H. As stated above, as a converter the M3 is truly balanced and this follows through to all the analog stages of the M3, and this makes the M3 one of the only true balanced headphone sources. As with the main outputs, the headphone drivers are also separately buffered so that all outputs can be used at the same time with no consequences. Given the high voltage rails in the analog supply, the M3 is capable of driving most common headphones to acceptable listening levels with extremely low distortion.

The M3 delivers a true balanced source for all applications and the M3H is unique in the headphone market as one of the only true balanced sources to drive balanced headphones correctly providing the best conversion for both PCM and DSD sources and support of all input sources including network streaming. 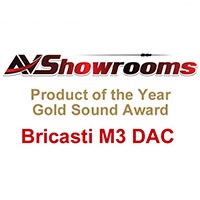 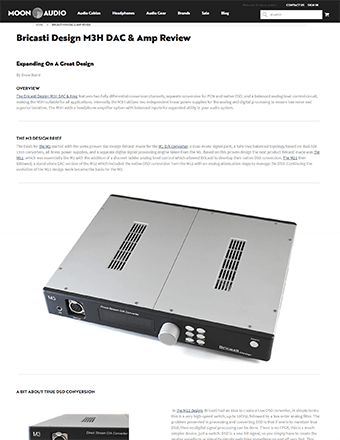 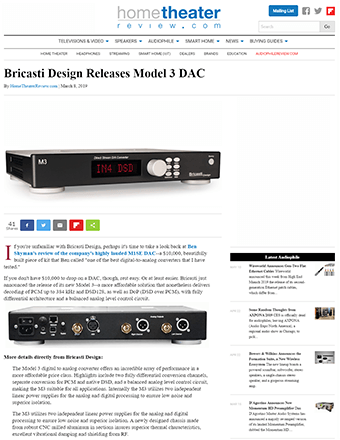 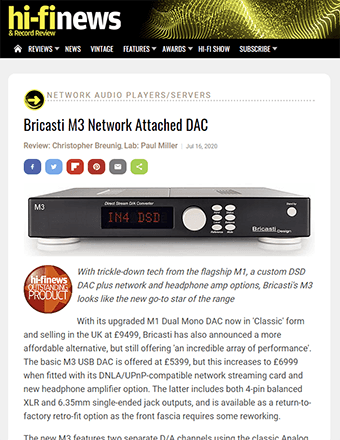