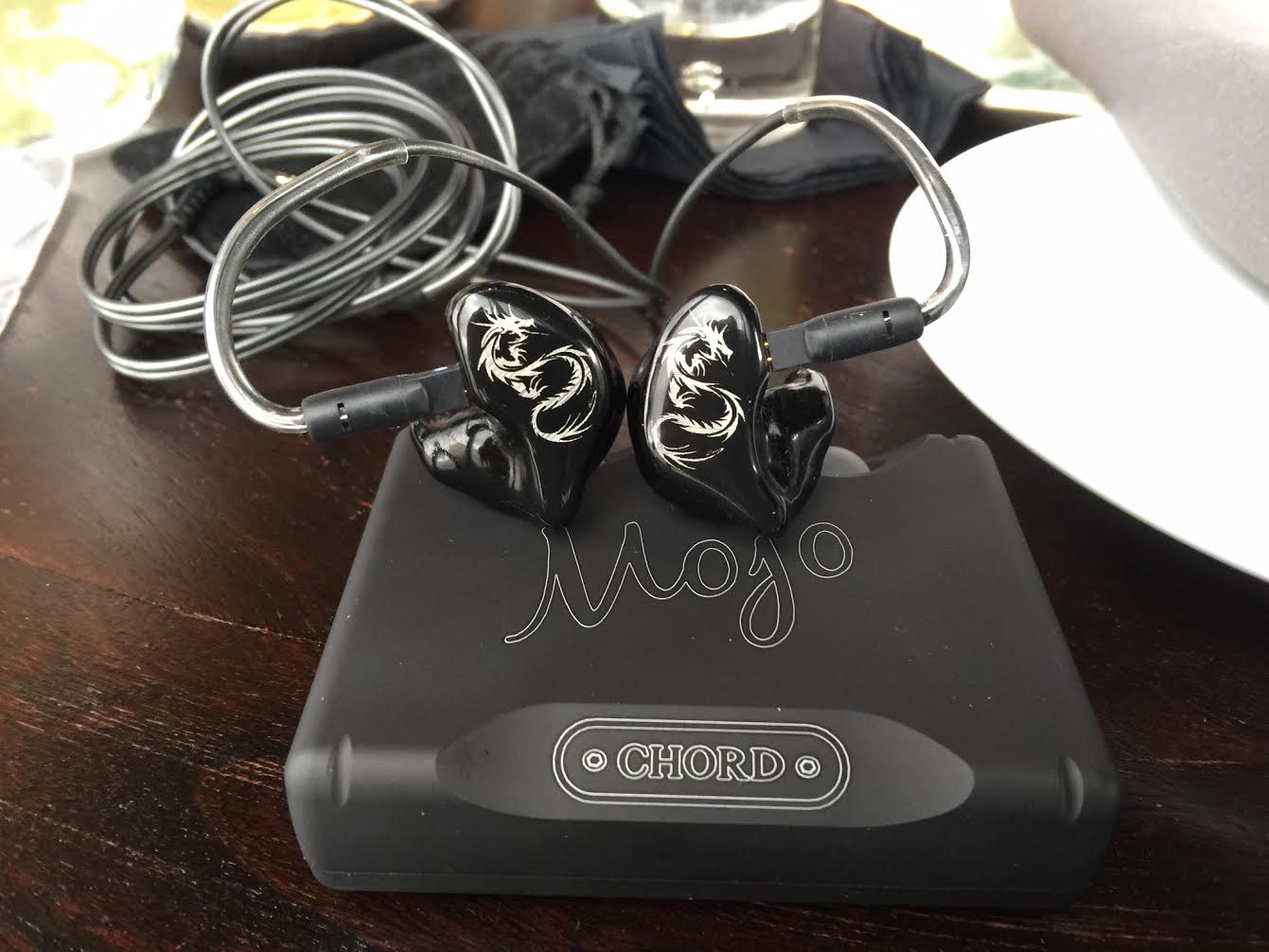 I'm listening to Chord's new Mojo Digital Analog Converter (DAC) and amp as I write this. I’ve flown almost 4,000 miles to have THIS musical experience. My hand trembles a little as I took Chord's new DAC to an Astell&Kern 120 II media player and a pair of JH 16Pro Freqphase In-Ear-Monitors (IEMs) with our Moon Audio Silver Dragon V1 IEM Headphone Cable. Here is what I hear & hellip;

You would be surprised how hard “dead quiet” is to create. We live in “noisy” times with signals and devices fighting each other for bandwidth and signal strength (why we prefer cables to WiFi). There is a pause in the music and no background hiss. Background hiss was the only Hugo complaint I ever had. On quiet passages, there was a small hiss when listening on high sensitivity IEMs. The hiss wasn’t bad enough to not LOVE Hugo's sound benefits.

Detail and clarity are incredible. Music is in perfect control. No sterile-ness to his DAC's sound. Mojo is very musical.

IEM users prepare to be spoiled by Chord's new Mojo. Heck, I think headphone listeners are going to be spoiled too, but the Mojo is SO PORTABLE IEMs come to mind. Drew's English Mojo

My jaw dropped again listening to Chord's new Mojo DAC. The Mojo isn’t as long as an iPhone 6, and it is a little more than twice the iPhone's thickness.

I only have one question. How did Chord fit sound quality like this in such a small footprint? Answer: Rob Watts has done it again! He is the brain behind the digital design at Chord Electronics.

On one end of Chord's new Mojo, there are 2 USB Micro B connections, 1 for charging and 1 for connecting to your computer or iDevice. The Mojo also comes with a Mini 3.5mm Coax digital input and a standard size Toslink connection for digital input from media players such as A&K (Astell&Kern), iBasso or whatever portable media player you have with a digital output.

At the opposite end, Mojo hosts two sets of 3.5mm headphone output jacks. On the top of the unit is 3 “scroll balls,” almost exactly like the singular scroll ball on the Hugo and the Hugo TT. One scroll ball is for the power you push and hold it to turn the unit on or off. The other two are used for volume control. One for up (+) and one for down (-).

Plain simple and efficient. Mojo is built like a tank. You will have a tough time breaking this thing. Bullet Proof!! Something James Bond would carry are things that come to mind. Chord's founder James Frank's love of airplane design is front and center again.

I was lucky. Seated at John Frank's table with his lovely wife and daughter I was treated to a sneak peek at a cool Mojo add on. Chord will have a four accessory butt plate that will plug into the end to hold digital connections.

I played with a prototype 3D printed piece. The printed plate swallowed up an Apple CCK cable thus providing a nice and short connection to your Apple iPhones and iPads. Chord Mojo Accessory for Digital Connections.

It is cumbersome to use an Apple CCK dongle along with a USB cable to hook up non-Apple MFI certified Amp/Dacs to Apple iPhones and iPads. Chord's new plate solves that pain in a short, neat, clean way.

These new Chord add-ons will be similar to the Aurender Flow. The Aurender Flow also acts as an external hard drive when connecting to a tablet or computer with a single USB such as the Microsoft Surface. These devices tend to have small internal memory. Chord's add-ons provide an external place to store and connect music files.

Drew Baird is founder and chief engineer at Moon-Audio.com

An Admiral I once had the pleasure of working for had a tradition that all newcomers must introduce themselves to the command and share something unusual or extraordinary about themselves that will elicit a "wow!". Some folks took far longer than others to impress and an unfortunate few were likely recipients of sympathetic exclamations to save from embarrassment.

I've had my Mojo for a couple of weeks now and have listened to a variety of musical styles from my collection and am generally impressed that the improvement is of similar magnitude to when I quit using my manufacturer included earbuds in favor of my P5s. And then again from the P5s to the P7s. It doesn't seem to handle all styles with equal enthusiasm - I was kind of hoping that King's X _Dogman_ would thunderously press my consciousness against its back wall without having to increase volume too high. Still displays more clarity and nuance, but I don't suppose there's much for more power except more power.

I waited to play probably my favorite album of the last few years (Daniel Amos' _Dig Here Said the Angel_) before settling my opinion of the Mojo. Figured it's one thing to greater appreciate the fringes of my tastes, but a wholly other matter to possibly love a core fixture all the more. Well, the opinion was quickly settled and lyrical wisdom was given amplitude by beautiful musical detail I had not previously heard.

The Mojo makes my favorite music even more favored.

Now if a coworker asks what it is and how well it performs, I have some ready answers:

"Just like I remember the first time I used a Mac, I’ll always remember the first time I listened to my Mojo. It's stunning: musical, powerful, detailed, no hint of grain, with delightfully flat response. Clearly their unique FPGA approach has some serious magic. I’ve driven everything from tiny IEMs to the monstrous and power hungry Abyss AB-1266s—absolutely no problem. The milled aluminum case is a delight to hold.

"The Chord Mojo is amazing in every way! I have never heard the detail in dynamics, soundstage, and imaging on a portable device like this before! I have used it with Shure SRH1540 and Hifiman Edition X.

There is SO much performance for the dollar here! The sound is very natural. Nothing seems to be emphasized or missing in the sound. Triangles and cymbals seem to have a bit more "air" around them.

I don't know just how much Drew's Silver Dragon Toslink has to do with the sound but I'll say this. The players I am using are Astell & Kern 100 MKII and 100 II. Drew's cable WILL pass a 24/192 signal from the players to the Mojo. Another brand of cable that I have WILL NOT!

The Chord Mojo is a no brainer!"

"I have had my mojo for a while and I have to say it works flawlessly with my Fiio X5ii and my Macbook pro. I listen through Grado RS1i's and they are perfectly wonderful with the mojo from either source.

I was reluctant to spend $600.00 plus without trying it, but all the reviews I read on the mojo were stellar so I pulled the trigger. All the reviews were great and they were not wrong.

My mojo is now a permanent part of my setup."

"The Mojo is the "game changer" that the company and the customers have all claimed it to be. I am stunned at the sound quality. I have tested several DACS, both stationary (desk top) and portable, as well as portable amps. I finally settled on a desk DAC and the Beyerdynamic A20 amp for my Beyerdynamic T1's (2nd gen. 600 ohms). The DAC was anupgrade from a good company with a solid reputation, similar to price as the Mojo.

The reviews on the Mojo weighed upon me and I finally listened to the lengthy interview with the owner of Chord Electronics in which he was honest, humble, and forthcoming in his answers. I had to give the Mojo a try.

I was stunned at the sound quality. Stunned! Although I do not possess the vocabulary of an audiophile, I know some things such as "soundstage" where the instrument separation is clear. The Mojo not only has the instruments separated but the vocals are deep, almost like 'three dimensional' listening! There is a depth to it that I can only describe as being "live" or "dynamic" while the definition reminds me of watching old baseball reels from yesteryear, after seeing high def: the difference is stark!

Thus was the overall sound quality of the Mojo. It left my DAC and amp set up as not just inferior, but dissatisfaction set in. Once my ears adjusted to the clarity and complexity of the Mojo, including the most beautiful bass (Stevie Wonder) and vocals (as if Bob Dylan was in my living room singing "Working Man Blues #2) and the horns blasting ("Keep the Customer Satisfied" by Simon and Garfunkel). Yet two albums have been the most ardent in uncovering "new" musical 'data': Sgt. Peppers and Pet Sounds.

I love the design of the Mojo and that it is built like a tiny tank.

It has replaced three (3) items: my DAC, my desktop amp, and my portable amp for the iPhone 6. It is with my Macbook Pro all day, but ready to go on a moment's travel for portability. I look forward to Chord's coming blue tooth modular as an addition.

This has been a case where all the hype was true. It is a game changer and will awaken your musical library like nothing else when coupled to quality headphones. I did not think I could hear the Beatles any more; I have heard it all since I was a boy, 40 years ago, yet the Mojo and T1's have brought new life into the entire catalog.

From The Blue Danube to the lovely vocals of Alison Kraus, the Mojo captures it all, and I look forward to the brain's adjustment to the many, many more pieces of 'data' that it must process.

Chord has allowed the average person to enjoy what only the audiophile who has spent thousands of dollars on a DAC, has experienced.

I am grateful for Chord, and for the customer service, here at Moon Audio. I am a new and loyal customer."