Erika became tuned in to the power of music pretty early.

"I remember being very young ... around 3," she recalled. "My mom let me play with her 45s. I'd put them on a little portable record player. I couldn't read yet, so I learned to recognize the labels on the records to help figure out which ones I liked best. I would sit there and listen again and again."

Music had her attention, and soon it had her heart, too. As a teenager, she went through the ubiquitous pop music phase. Then, expanding on what had always been an affinity for artists from the UK (an early fondness for The Moody Blues comes to mind), she found herself drawn to the raw, emotional beauty of Gaelic vocals and massed choirs.

At some point, she began to use music as a tool. There were particular pieces she'd play when she was happy, some when she was sad, and others when she was feeling anxious.

She didn't always label it as such, but upon reflection, Erika realizes that music has been a form of therapy for most of her life -- one that has great power to both settle or shake up her emotions.

Getting Unstuck with Music

Erika may or may not be still while listening to music, but one thing is for sure: emotions are never static. This is something she uses to her advantage, especially when she is looking for a kind of release.

"There are my really special songs that help me unlock emotions that may be stuck," she explained. "Certain songs just touch me and I truly have a visceral reaction. I get goosebumps. Sometimes my body even twitches! My breathing changes; it can get deeper or shallow depending on the song."

When it comes to choosing songs for therapeutic goals, she generally gravitates toward pieces with vocals, strings, or both. She also likes music that contains what she calls "contraction and release."

"Certain songs have certain changes," she explained. "They go up and down in octaves or in volume. The more variable the song, the better it is for me."

Choosing a soundtrack is a mostly intuitive process, she said. "I have a playlist of certain songs that typically get me emotional. Sometimes I listen because I want to be reconnected to myself, the music, the sheer beauty of it -- and to be amazed at how good my equipment sounds. At other times, I need to have an emotional release and I listen knowing I will cry. At other times, I just want to be moved."

One song that without fail will elicit that response is "Movement III: Hope" from the multi-artist album The Prayer Cycle. The sound of the young man's voice in the boys' choir in the piece gets her every time. "He sounds like an angel to me," Erika said. "I do think it's the combination of his voice with the music; they just go together. I can feel my chest constrict right now just thinking about what it sounds like to hear it on my system."

When she is feeling grief, she finds that Gaelic laments are especially cathartic.

"They are so, so sad," she said, "but listening to them somehow soothes me while making it OK to grieve. In Scottish/Irish traditions, they used to have people that would be paid to keen (cry or weep). They would sing and vocalize with such sadness that it helped people cry and grieve. They embraced it."

New headphones weren't on her radar when she visited Moon Audio; she was pretty happy with her Grado GS1000e headphones. She was here to look at DACs (digital-to-analog converters) and to check out some loudspeakers. She'd recently heard a pair that "knocked her socks off," and she was looking to recreate that sound in a full-room audio setup at home.

But after some discussion with Moon Audio's Drew Baird, the two determined that she didn't quite have the right space at home for the audio setup she envisioned. He asked her, "Are you set on the loudspeakers, or are you just after the sound and emotional response you had with the ones you heard?" If it's the latter, he said, Erika could get that through an upgraded headphone setup.

Erika realized it was the latter. She had a glimpse now of a next-level listening experience, and she wanted -- needed -- that in her life.

Thus began the headphone trial. Erika and Drew talked about what type of music she likes (mostly Irish/Scottish artists) and her listening goals ("all the details"), but they didn't discuss brands or budget. Erika wanted to form an unbiased opinion. She auditioned several headphones with a Silver Dragon cable to enhance the detail effect she was after.

Some headphones were what she calls instant rejects; they just weren't her cup of tea. Others sounded quite good, but didn't dazzle her enough to consider buying. 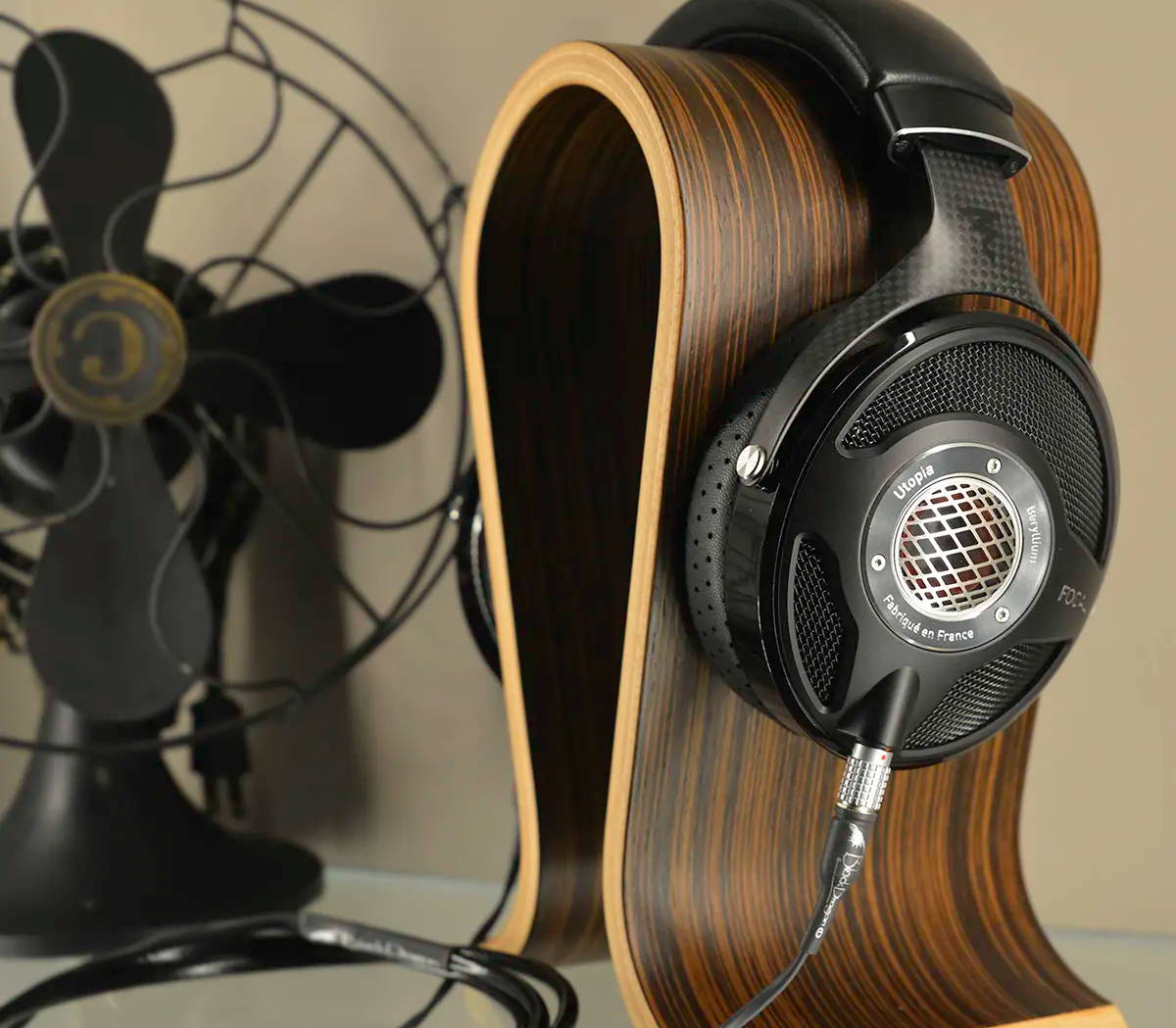 A couple of pairs sparked an emotional reaction, and she put them on a nearby chair. Soon, there were two pairs on the chair. She figured she would be buying one of them.

Then Drew handed her one more pair of headphones to try. "You're going to want to spend some time with these," he said.

"These" turned out to be Focal Utopia headphones, and when the music started, Erika's world changed. So did the number of headphones on the chair.

The first song she listened to on the Utopias is one that always makes her cry. However, she said the tears don't usually start until the vocals do. In this case, she started to cry in earnest after only a few notes. "Something just clicked in my brain and body," Erika said.

"I kept listening to my favorite songs. I was completely blown away and emotionally spent and I loved it! I knew I was going to have to have that sound at home."

Here is what Erika is using at home along with her Focal Utopia headphones to help her get the very most out of her music:

Erika uses Silver Dragon cables, which augment the detail and open presentation that she craves.

What are People Missing in Their Music?

In the audiophile world, we talk about analytical listeners -- so-called "detail junkies" who want to hear every single nuance in a file. Erika is a detail junkie.

"I think a lot of regular music listeners have no idea what they are missing in their music," she said. She wants every breath, every string pluck. She wants to feel like she is right there on the stage with the performers. But she is also the type of listener who wants to get lost in her music, something that may seem at odds with hyper-focusing on details. Yet Erika has found the sweet spot.

"I can get so immersed in the music, listen to every sound, all the instruments, the voices," she said. "I sometimes feel like I become part of the music. I get lost in it. Then I can be in the place and space between being awake and asleep and float there for a long time. That is definitely therapeutic for me."

Asked what's left on her audiophile bucket list, Erika said she would like to upgrade her portable system, because now she's acutely aware of a difference in quality between her home setup and what she uses at the gym. She'd eventually like to invest a pair of custom IEMS (in-ear monitors) and a DAP (digital audio player). But as for her full-size headphones, she's pretty well set.

"I love reading about the latest gear but don't feel a need to upgrade my headphone system. Granted, what I have is pretty top-of-the-line, but some would still not be happy and keep switching things out to squeeze out every last bit of sound improvement," she said.

"I wanted something I knew I would be happy with for years and that would make me more involved with my music and to hear every little thing there is to hear. I have that now."