Chord Poly Setup Tips - Everything you need to know

Chord Poly is a Portable Wireless Streaming device to pair with Mojo by Chord Electronics.  Please find our Chord Poly How To Setup Guides below to help you set up your Poly and how to connect Poly to various different configurations including your network, phone, Roon, aandroid, Roon, Tidal, AK Connect, 8Player and BubbleUPNp. Direct Links below will show you how to get to each how to document and what each guide includes.

The Chord Poly charging guide will show you how to charge your Poly to optimal power quickly and efficiently. 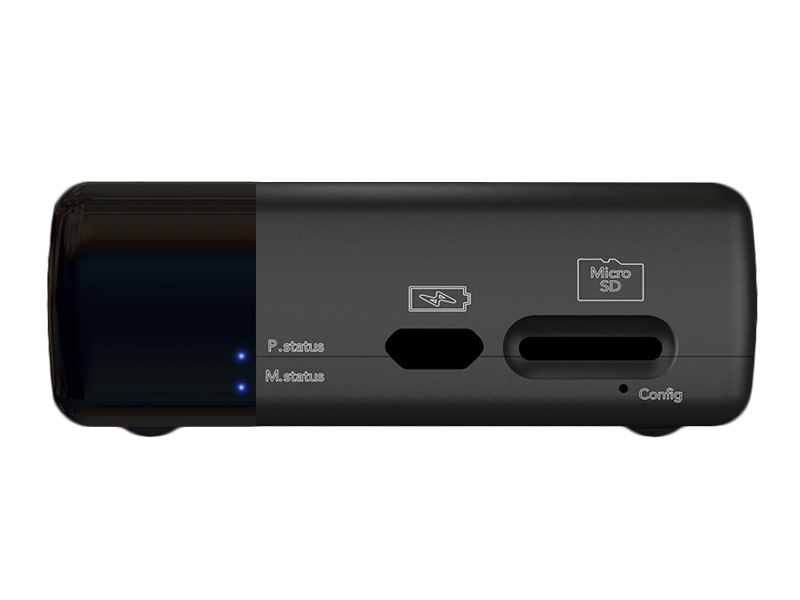 When you charge the Poly and Mojo while connected together, the Mojo takes charging priority over the Poly. Thus the Mojo will be fully charged before the Poly is fully charged.  Please do not use your computer to charge the Poly via its USB connection. Most computers only output 1/2 amperage when charging devices and this is not enough power to fully charge portable audio devices.

We recommend the wall wart chargers that you plug directly into the AC outlets. They need to be a 2 amp or higher rating. Please see the Tronsmart USB Charger which is a 3 amp charger so you can charge both the Poly and the Mojo separately in different ports at the same time.  Using a 3 amp charger will greatly reduce the time to fully charge them both. And by charging them separately with there own cable greatly decreases the charging time. 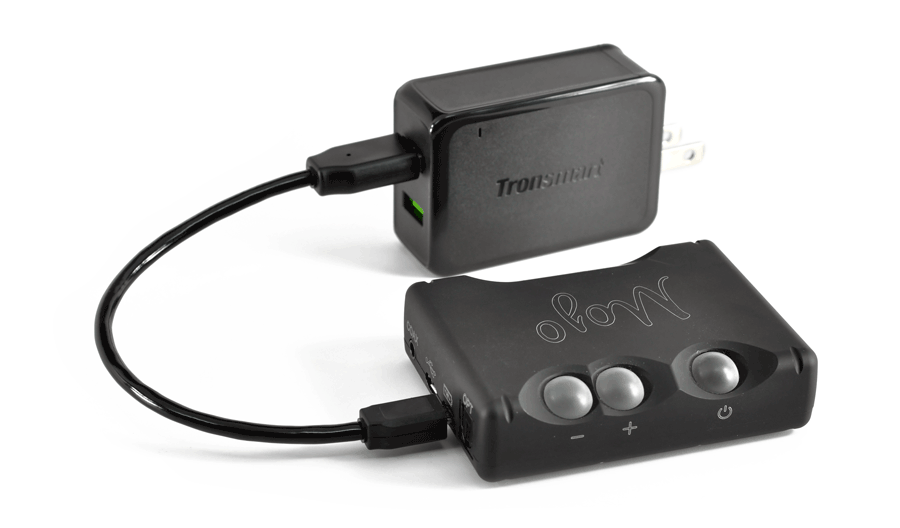 This charging guide will also show the lights and colors the Poly and Mojo will have when charging the device. The percentage is illustrated by a change in LED color.   If you see the p.status with no light on it, that means the Poly has not been charged and only the Mojo has been charged.  The bottom m.status, is the charging status for only the Mojo.  Let's say the light on the p.status is red and the light on the m.status is orange, that illustrates the Poly is only 5% charged and the Mojo is 25-50% charged.

Connecting the Chord Poly to WiFi:

Attaching Poly to a WiFi Network: 1:1

This Wifi guide will help you connect the Poly to a WiFi network. To complete this process Poly will need a 2.4Ghz enabled WiFi network to connect to. An Android or Apple IOS phone or tablet will be required as the intermediary. You will need to know or create a Wifi(SSID) on the 2.4Ghz WiFi network you want the Poly to connect to along with its password. If your network does not have a password, you will need to create one for it. Poly should also be fully charged before setup is attempted. Poly also must be set up with WiFi before Bluetooth can be used. 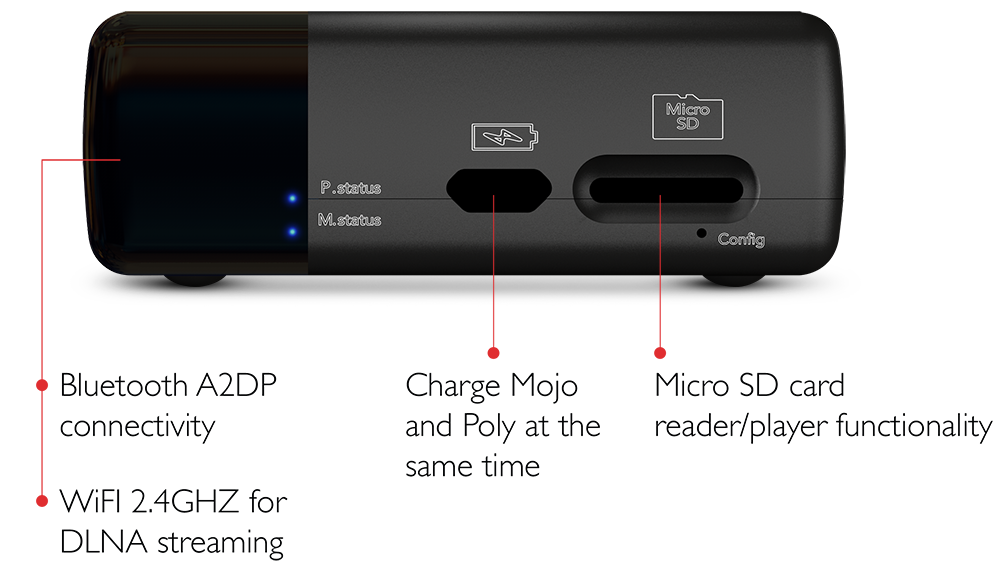 An important note: Your Wifi router may be set up to do different bandwidths, both 5Ghz and 2.4gGhz.  I would highly recommend setting up two different SSIDs with 2 separate names.

Set up the first one with the standard configurations to connect all other devices in your house: portable laptops, phones, etc. Set up the second one specifically for your Chord Poly.  This will make your life much easier when connecting the Poly via WiFi.  Set up the second one to default to 2.4Ghz for the Poly.  You will have much fewer issues when connecting to your media libraries on your network with your Poly.

Poly guide for Bluetooth connection illustrates how to connect the Poly via Bluetooth.  Bluetooth is a much quicker, simpler way if you want to connect to your friend's phone or maybe you have a device that only has Bluetooth and doesn't have WiFI access such as a AV soundbar.

For your TV, if you want to watch a movie and use the Mojo as your DAC and the Poly as the interface to connect to that Bluetooth device, this guide will show you how to do that. Or to connect to your friend's phone, so you don't have to set up a complex wireless network, you can just connect the Poly to it via a simple Bluetooth connection.

The 8Player app is an iOS app for connecting your Apple devices to the Chord Poly.  Once you've set up your Poly to connect to your WiFi, the 8Player app acts as a remote control to point to media libraries or different computers on your network for streaming the music libraries to your Poly.  Or it's for controlling and directing the Poly to look at the SSD card on your Poly and to pull the music from that access point. 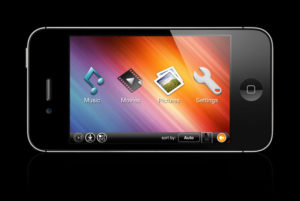 There are very flexible UPnP and DLNA apps for seeing all kinds of plug and play audio devices on your network.  There is no right or wrong app, they all do things a little differently and there are Pros and Cons to each one of them so I download each one and see which one fits your situation best.

The AK Connect App is designed by Astell & Kern to connect their music players to your iOS device so you can control them and output music to your 2 channel setup.  The AK connect will also see the Poly on the network so you can stream the music from your Astell & Kern digital audio player straight to the Poly.  It will see other devices, not just the AK devices, but its a little more streamlined based on the interface of the AK, so if you prefer using the AK interface, then this app may appeal to you.

Now that Poly is on a WiFi network. Poly can be set up to be a playback device in Roon.  Roon is a subscription service that essentially acts as an encyclopedia or Remote control for all the music on your network. It finds all the media libraries on your network and catalogs them into one general remote control space for you to find all your music easily.

You can also interface your Tidal account, another subscription service for hi-resolution music streaming so you can integrate and combine both subscriptions in one place as if Tidal is part of your library in Roon so you can search and browse all types of music that aren't on your playlists as you would with the normal Tidal interface through Roon and its a much sexier and nicer layout than Tidal.

The Poly user manual is a basic manual or go-to guide on how to use and set up the Poly. 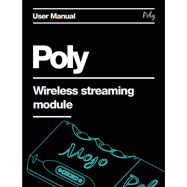 The current Poly firmware version is: 1.0.10

Thanks for reading this blog post, please post your questions below so we can answer them LIVE on the blog.  Thank you.