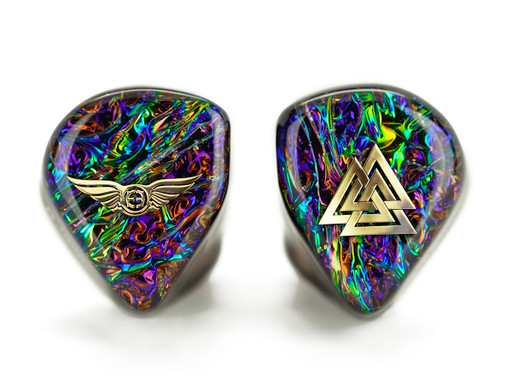 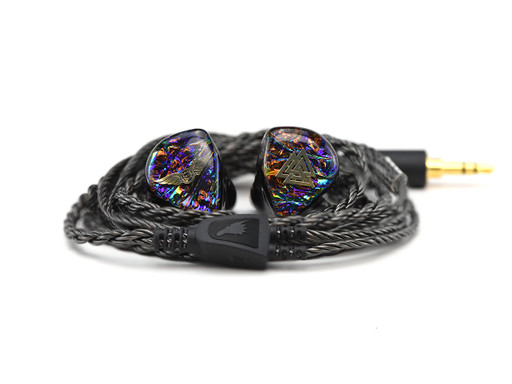 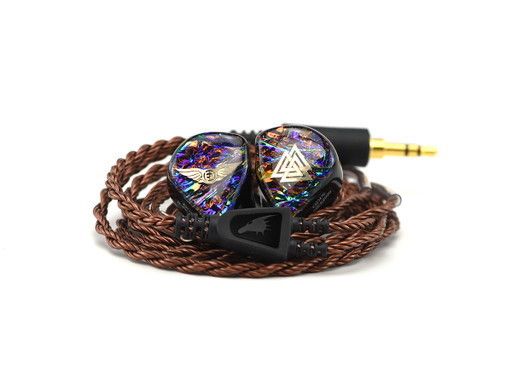 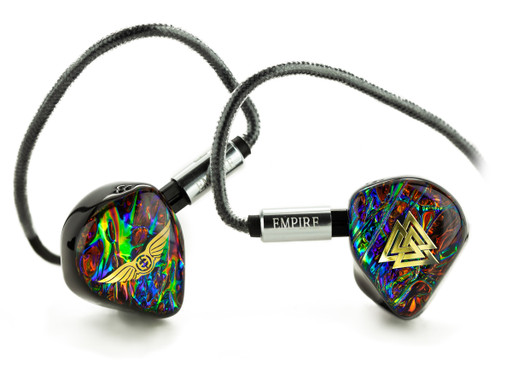 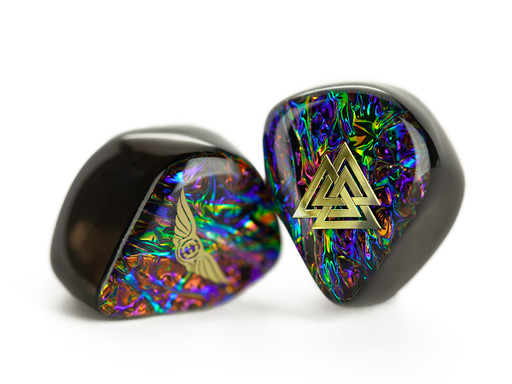 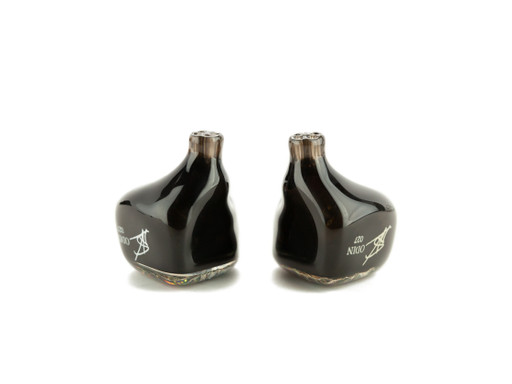 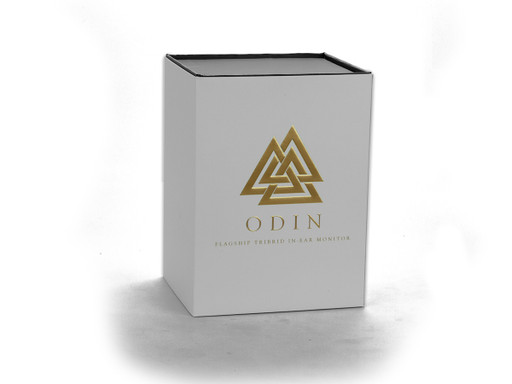 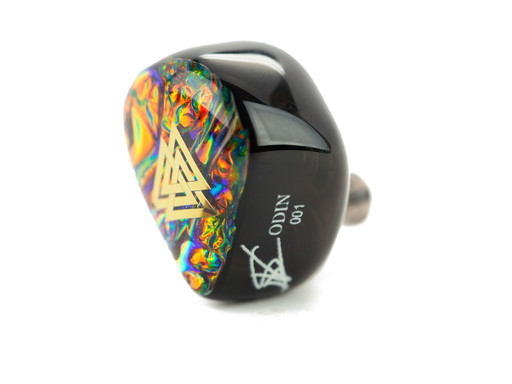 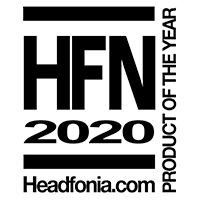 The universe needs icons. Those extraordinary few that stand clear of the rest. For these indiv… More details

The universe needs icons. Those extraordinary few that stand clear of the rest. For these individuals who inspire greatness, only the purest formulation of Empire Ears will do; an icon like no other. An IEM that stands alone - so superlative as to be named after the god of wisdom, poetry, death, divination and magic. Odin has arrived. Its beauty leaves no room for doubt. Its power cannot be reasoned with. Unquestionably, Odin sits at the pinnacle of the Empire Ears bloodline as the most legendary flagship in-ear monitor ever.

“ODIN is designed to make the most of every moment each listener spends in its company, promising instants of sheer listening euphoria. While conventional IEMs focus on simply reproducing sound, ODIN authoritatively delivers the exacting emotion of every nuance recorded through its extraordinary 5Hz-100kHz frequency response range. These inspirational, dreamlike moments are made possible by the utilization of the three best IEM driver technologies currently available, the most advanced crossover system in the industry, the most potent components we could possibly get our hands on and the masterful tuning by our founder, my father and CTO, Dean Vang.

ODIN is the personification of Empire’s DNA at its most extreme – in design, performance and breadth of capabilities. ODIN rediscovers the true meaning of engagement between listener and IEM.”

Empire Ears believes that an extraordinary IEM requires an extraordinary cable. For the first time ever they've collaborated with bespoke cable manufacturer PWAudio and PENTACONN of Japan to forge a cable worthy of Odin. Introducing Stormbreaker, an ultra premium handcrafted cable comprised of a proprietary USA-sourced OCC Copper Litz configured in a quad conductor, dual guage design wrapped in an elegant black carbon jacket. Stormbreaker is standard equipped with a CNC silver Valknut y-split featuring a .78 2-pin connector with a 2.5mm balanced termination.

A Trinity In Unity

ODIN is the most powerful and exclusive IEM in Empire’s history. Boasting three of the industry’s most advanced driver technologies, ODIN is truly a standout tribrid flagship IEM with an uncompromising performance ethos focused on delivering the purest connection between listener and IEM.

Weapon IX+
The signature W9+ dynamic driver brought serious performance to the IEM world by combining the breakthrough of an enclosed woofer in a tuned bass-reflex system. Elevating the W9 design formula to its highest level, the W9+ boasts a larger internal coil diameter, more linear excursion envelope along with a more capable suspension to handle peak-to-peak excursion while mitigating distortion. W9+ extinguishes any limits the previous design had and delivers unparalleled bass on all fronts. Every W9+ subwoofer is hand assembled to exacting quality standards in a Norcross, Georgia laboratory.

BA Drivers
ODIN comes equipped with 5 proprietary balanced armature drivers to deliver the signature midrange that the world has come to know and love from Empire Ears. Each of these drivers has been purpose built to precise requirements and exacting standards. Empire Ears works closely with vendors to ensure that only the highest performing components are used.

Legendary Crossover Network
Genetically dissimilar from the rest of the IEM world, the synX crossover network truly stands out with countless bespoke methods and technologies protecting it as a unique masterpiece. A marriage of 3 different driver technologies become symphonized by a unique, proprietary 8-way synX crossover network designed to maximize performance from each and every driver.

The lightning-quick electrostatic drivers accommodates ODIN’s wide frequency range while remaining balanced and compact. A single bespoke transformer unites the quadruple electrostats via the proprietary EIVEC technology to all of the other components while eliminating any signs of phase incoherence and distortion.

ARC (Anti-Resonance Compound) is a proprietary conformal coating that virtually eliminates unwanted vibrations and resonance from within IEMs. ARC effectively increases the mass of the components it’s applied to: every driver, crossover, and sound tube. This gives the internals more solidity while serving as a dampener to absorb the unwanted resonance instead of reflecting them out of phase. With A.R.C. clarity is increased substantially, bass is deeper, and the IEM becomes more efficient

Included at no additional charge with each order. 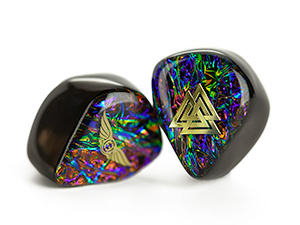 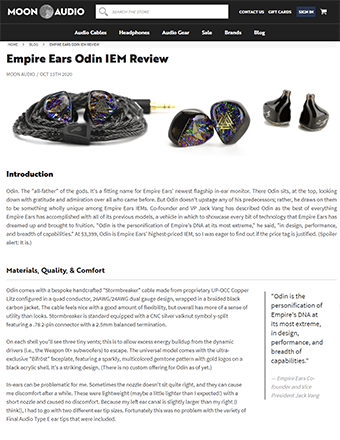 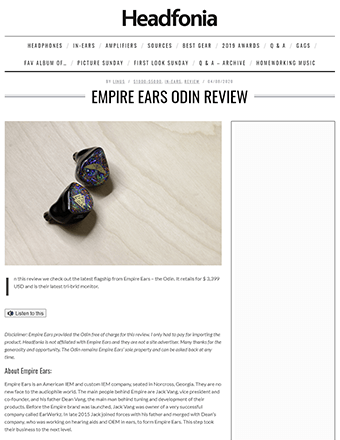 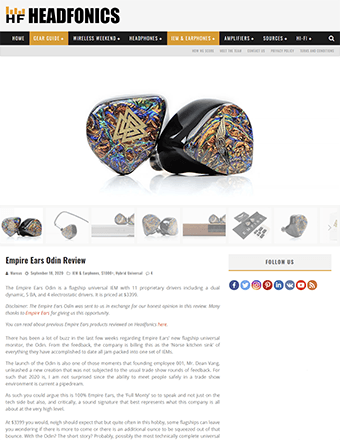