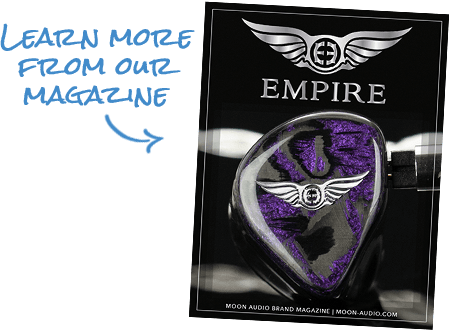 State-of-the-art design and relentless attention to detail are a big part of what has propelled Empire Ears to a worldwide leader in the IEM market, with a sizable and loyal customer base of stage musicians, sound engineers, and audiophiles.

Dean Vang's incessant drive toward innovation and "achieving the impossible" has earned him the moniker of "mad scientist" at Empire Ears. The fruits of his and his team's labors can be seen in Empire Ears' variety of proprietary technologies, from Weapon IX and Weapon IX+ (W9 and W9+) dynamic subwoofers and the synX Crossover Network to EIVEC (Empire Intelligent Variable Electrostatic Control) and A.R.C. technology that helps to eliminate resonance.

But it's not just what goes into every Empire IEM; it's how it all comes together in the pursuit for unrivaled build quality. Every Empire IEM is handcrafted from the highest-quality materials, and every single component is rigorously tested against the most exacting standards.

The Empire Ears Lineup of IEMs

The EP Series is geared toward performing artists, recording engineers, and anyone who desires a “true to recording” sound loaded with detail and precision. These hybrid IEMs feature proprietary balanced armature and electrostatic drivers.

The X Series is designed to give listeners the “front row” feel of a live performance. A mix of hybrid and tribrid models feature proprietary balanced armature, electrostatic, and W9/W9+ dynamic drivers.

Hero, a four-driver hybrid, draws from elements of past Empire flagship models Legend X and Zeus XIV, but comes in at a lower price point. With three proprietary balanced armatures and a next-generation W9+ subwoofer, Hero boasts epic bass response with lush vocals and excellent detail.

What are in-ear monitors?

In-ear monitors, or IEMs (also called earphones) are small audio devices that fit inside the ear canal for listening to music. Originally created for musicians and performing artists so that they could hear a personalized audio mix while on stage, IEMs have both professional and consumer appeal. In-ear monitors come in universal fit or custom-molded models and feature a variety of sound signatures, designs, and price points.

How do in-ear monitors work?

In-ear monitors work in fundamentally the same way as headphones, with internal drivers that push or "drive" the music from your audio source to your ears. While headphones often feature one driver per ear, IEMs often have multiple drivers. IEMs utilize balanced armature drivers, which are smallest driver type and are designed to provide a clear sound that focuses on the middle and high frequencies in your music. However, many IEMs also feature dynamic drivers for added bass response and/or electrostatic drivers for increased treble response and clarity.

How and why do performing artists use in-ear monitors?

Performing artists use IEMs so they can hear what they are singing or playing during a performance (a process called "monitoring"). They often use in-ear monitors in wireless setups that include a rack-mounted transmitter and a wearable receiver. Wearing an IEM allows the performer to hear a backing track or personalized audio mix that the audience does not hear. IEMs have largely replaced the use of wedge-shaped stage monitors and amplifiers, which take up space on the stage and must be cranked to high volumes, which can damage hearing. Musicians usually opt for custom in-ear monitors for maximum secure fit and noise cancellation.

IEMs are a popular choice among audiophiles and music lovers who desire a convenient, high-fidelity listening experience. Audiophiles in particular tend to be more critical listeners who desire realistic recreation of the audio when listening to their music, which is why many audiophile-grade IEMs have multi-driver designs. (That is not to say you cannot get remarkable sound from a single-driver IEM!) Those who desire a truly immersive listening experience may also appreciate the elimination of ambient sound that results from the tight seal of an IEM. (Note: Some IEMs come with an ambient noise filter that does allow some outside sound in.)

Are IEMs good for casual or everyday listening?

Absolutely! IEMs are a good choice for travelers, office workers, gym-goers, runners, and anyone else who desires a great-sounding, lightweight, portable, inconspicuous, and -- if desired -- custom-fit earphone. The lack of sound leakage with IEMs allows you to enjoy your music in settings where it would disturb those nearby. Likewise, IEMs can be good when you don't want to hear outside sounds. Some even say that the isolation you get from an IEM trumps noise-canceling headphones.

IEMs are not only safe, they can help to protect your hearing. In fact, the first pair of custom IEMs was created to protect drummer Alex Van Halen's ears from further damage after years of loudspeaker exposure. IEMs create a seal that blocks out external noise, and therefore are able to function at lower volumes. Of course, just like speakers used at loud volumes, IEMs can damage your hearing if used at too-high volumes. A good fit is key here, because if your IEMs are not inserted in a way that creates a proper seal, you will be forced to crank your music to get the volume or bass response you desire.

Are in-ear monitors better than headphones?

IEMs offer a more personalized sound since they fit inside your ears. They can't be beat for portability and ambient noise isolation. IEMs will allow you to hear all of the details of a studio recording or live performance without worrying about sound leakage, background noise, or interference. Additionally, if you are seeking a custom-fit solution, IEMs will be the way to go. The multi-driver design of many IEMs can make for phenomenal sound, but in general, in-ear monitors will not match the soundstage of a full-size headphone. Another thing to consider: Everything's relative when it comes to sound quality. A $200 IEM will probably sound better than a $20 pair of headphones, and a $600 pair of IEMs likely won't hold a candle to a $4,000 pair of open-back headphones. But it all comes down to what sounds good to your ears.

Should you buy a universal fit or custom fit IEM?

There are several factors to consider when it comes to choosing which IEM style is right for you. Universal IEMs are designed to fit most ear canals, and usually come with a variety of tips so you can find your most secure and comfortable fit. If you don’t want to get ear impressions or wait for customs to be built, universals can be the way to go. Universal IEMs are also less expensive than custom-fit models. Performing artists and audio professionals who desire maximum fit and noise isolation usually opt for custom in ear-monitors, which are molded to fit the listener's unique ear anatomy using an impression obtained from an audiologist. With a custom IEM, you get a better seal and a personalized fit with no need for silicone or foam ear tips. Custom IEMs are also a good choice for those who seek a particular aesthetic. Buyers can choose from a range of colors and finishes, and can even opt for custom artwork.