We were happy to loan Steve from Headphone.guru our QDC 8SS and 8SH IEMs last month for his review. You can read his review below or at the following link. Thank you Steve! While he got to try some of our different Dragon Cables for the IEMs, Steve's review was based on the Black Dragon V2 IEM cable that is shipping with both IEMs at no additional price for a limited time. Get'm while you can!

(product links at bottom of review) 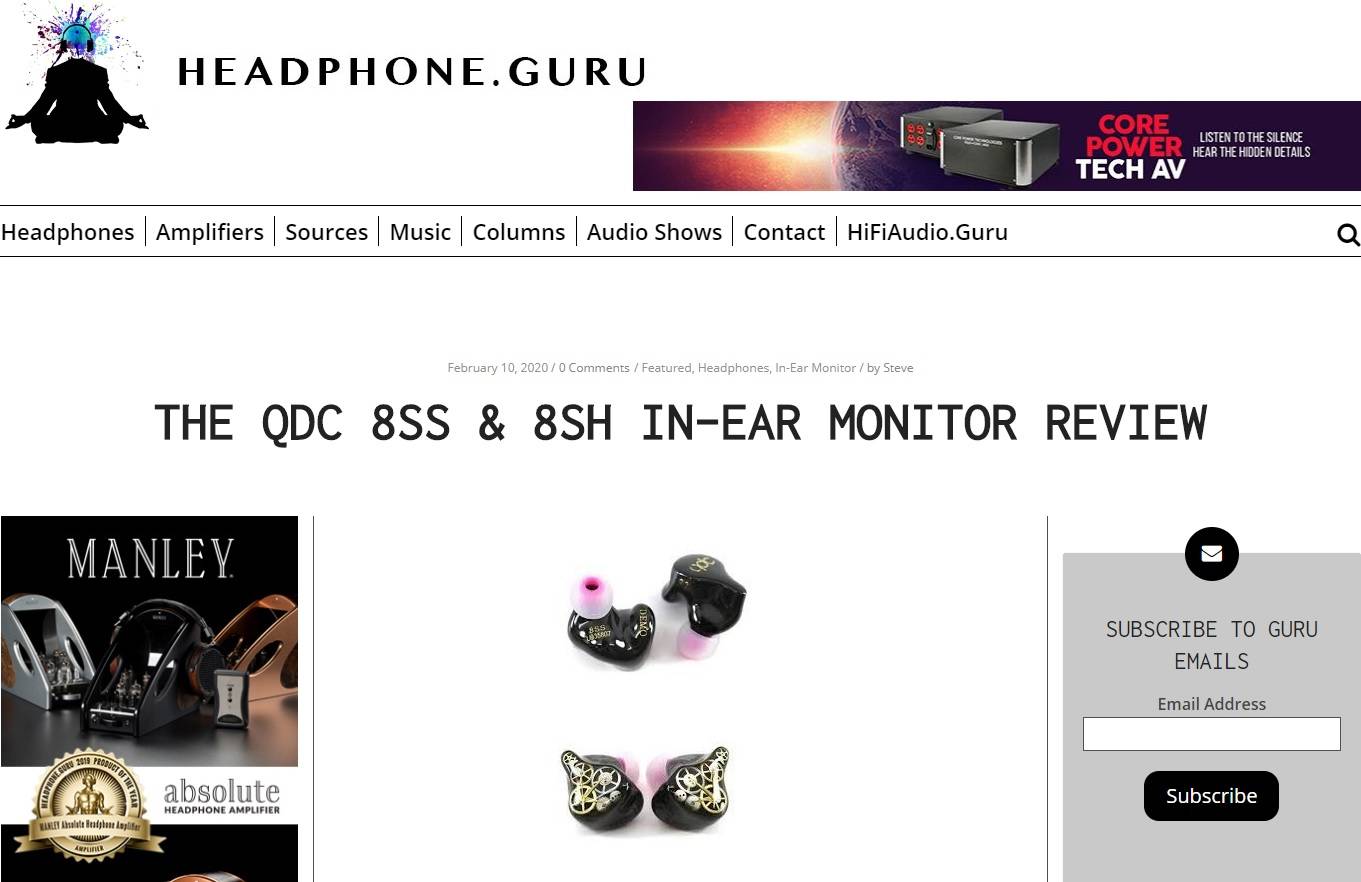 Happy New Year! I wish one and all a joyous and prosperous 2020! This month we have a two in one review. Moon Audio has graciously loaned me the QDC 8SH and 8SS to review. First and foremost, I want to thank Drew and Nichole for the opportunity to give my honest opinion.

A little about QDC…they are part of the Shenzhen Qili Audio Application Company based in China. They have been involved in high-end audio products for over 10yrs and have a cutting-edge facility and laboratory. Their R&D department is renowned for their innovation in products for the military and law enforcement and all of their In-Ear Monitors are tuned by several top sound engineers and musicians to provide an experience with wide frequency response, abundant detail, and crystal clear clarity and sound field positioning. They currently have several high-end models available and they are available for purchase from Moon Audio.

Starting with the QDC 8SS we have a beautiful IEM that has the following attributes: 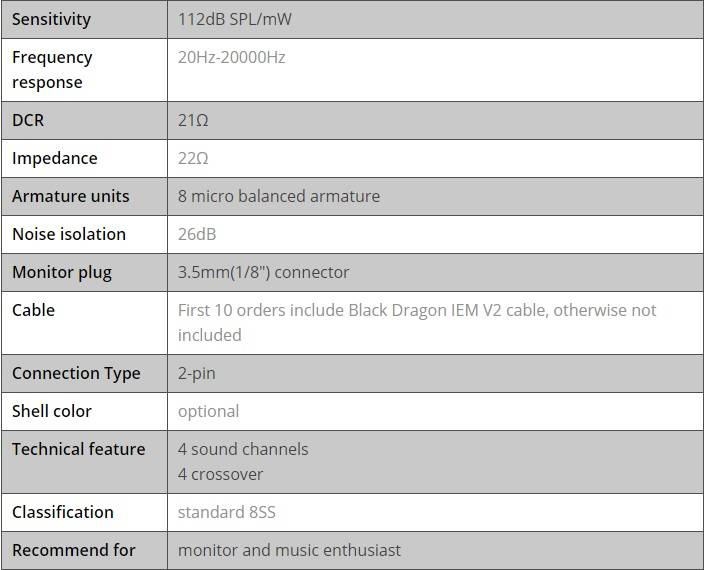 Both of these IEMs come in very nice high-end presentation boxes that include a Carrying Case, Ear Fit Kit, Cleaning Tool, ¼” Adapter, Airline Adapter, and User Manual. The feel of the accessories and storage box is good, very good in fact. You would expect no less from a pair of IEMs costing $1450 and they don’t disappoint.

I was very happy to find that Moon-Audio included one of their signature Black Dragon cables to use with both IEMs. The quality of their cables is legendary and I’ve been a fan of them for a very long time.

Both IEMs are solidly built of acrylic and can have any number of color designs applied to them at the buyer’s request when ordering. The 8SS came to me in basic black and the 8SH came with the micro gear pattern on the shell. I really liked the micro gear pattern as it gives them a Steampunk look. Both IEMs offer great sound isolation, especially when paired with Comply Tips. 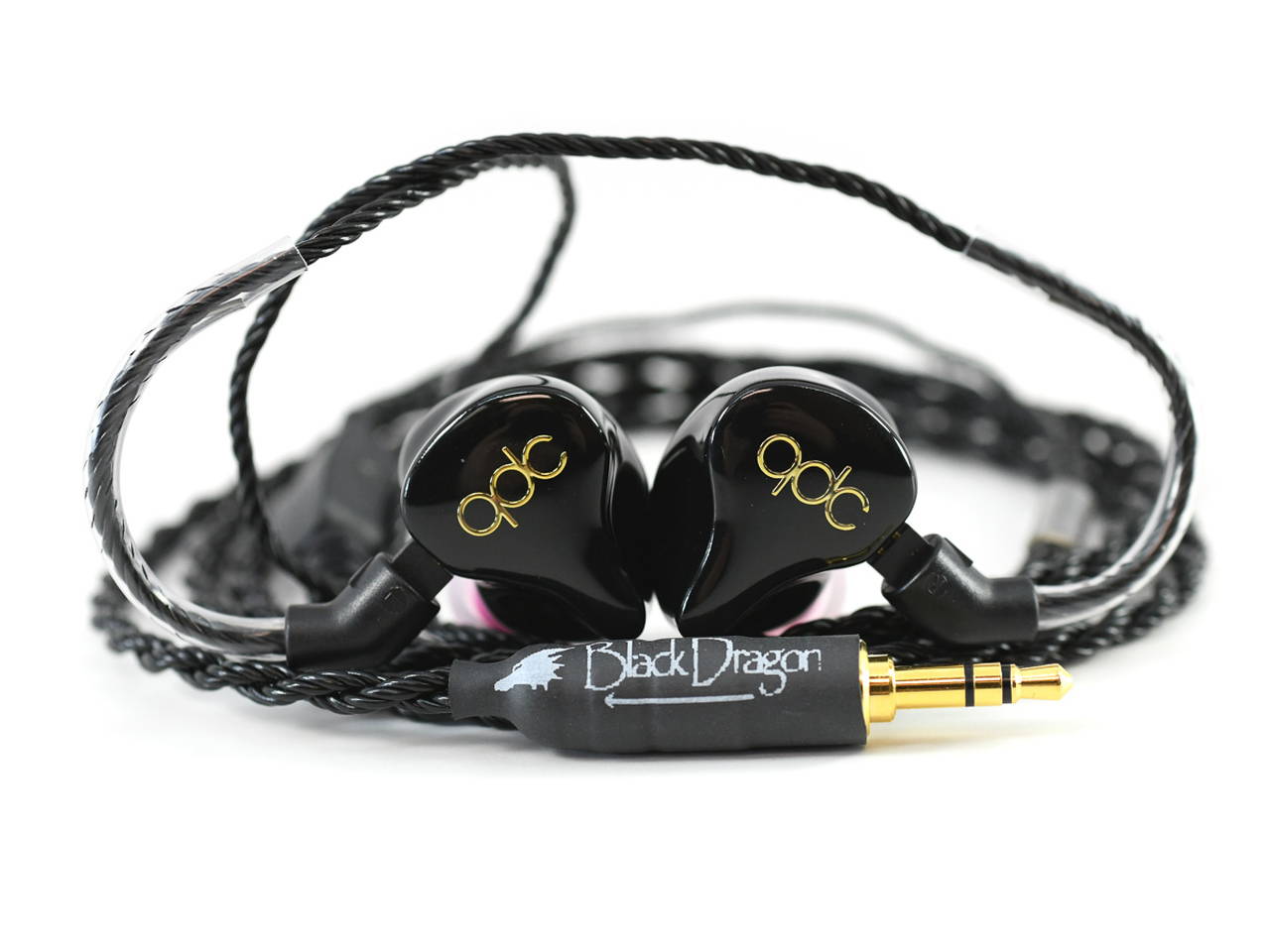 The 8SS model is marketed as being specifically designed for recording engineers and producers. They accomplish this by focusing on the low-mid, high-mid and high frequencies with no coloration of sound. The 8SS has 8 micro balanced armatures with 4-way sound channels and a 4-way crossover. Since they make claims to low distortion and incomparable resolution of sound I decided that I was going to use high-resolution WAV files to review this monitor and man I was not disappointed by their performance.

For the source, I used my iBasso DX220EX with the 8EX AMP module. I have adapted my Test Music folder to include all 138 tracks in WAV format to see if there is a noticeable difference between the SS and SH models. The music I test with is a combination of classic rock, heavy metal, classical, country, and EDM. I spent two weeks with each IEM and then another week A/Bing them side by side. I found the comparison to be eye-opening. There is definitely a difference between the two IEMs.

Starting off, I put on “Sgt. Pepper’s Lonely Heart Club Band” and the most noticeable thing about this track is the separation of instruments and the absolute black background noise. The vocals, horns, and background laughter comes through crystal clear. The symmetry of sound and detail brought a smile to my face. The positioning of instruments, to my ears, was focused on the left side for some reason in that track. Moving onto “A Day in the Life” I was pleasantly surprised by the neutrality of sound, which in the case of the Beatles, is paramount. Again the tone was beautiful and while the soundstage seemed a bit confined with hard edges, it was none the less very enjoyable. Of note “With a Little Help From My Friends” sounded so clear that the snare drum was pronounced but balanced with the vocals and background.

Moving on to something a bit heavier I threw Def Leppard’s “Pour Some Sugar On Me” at the 8SSs. The fast accurate response and heavy guitars sounded great. But due to the neutral tuning, everything sounded cold to my ears. If you like that clinical sound, these are definitely the IEMs for you. Every nuance of the music is portrayed in a way that hides nothing from the listener. That being said, they are a very enjoyable IEM and the 8 balanced armatures are so accurate that it truly is as if you are sitting in an engineer’s both at the studio.

I moved on to Beethoven’s “Symphony #6 in F Major” and of all the music so far, this sounded the best. As a listener, you can distinguish the positioning of every instrument and the harmonious blend of sound coming through these monitors was really incredible. From there I moved on to Queen and Led Zeppelin, and the 8SS performed superbly. Again, the soundstage is adequate but somewhat constrained for my tastes.

After testing these for two weeks, I can say without a doubt these are one of the best flat tuned IEM’s I’ve ever tried. Even though I find these to be neutral and clinical, the tone is exceptional and I wouldn’t hesitate to recommend these to anyone in the recording industry.

Let’s move on to the 8SH IEMs. 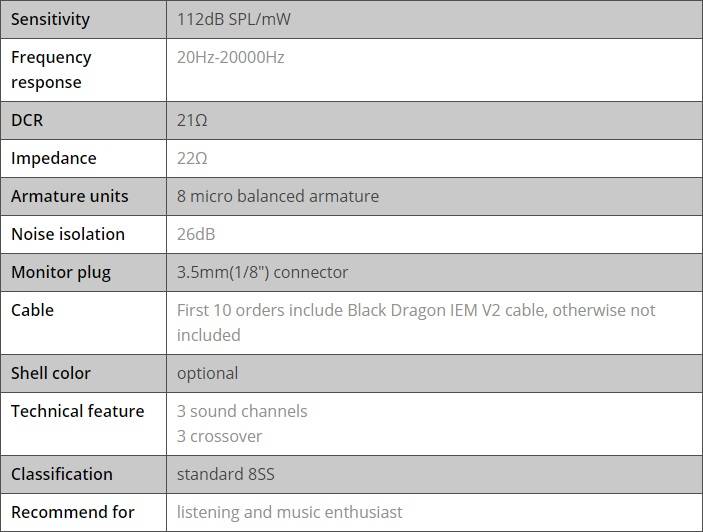 The 8SH model is somewhat different than the previous 8SS. These are marketed towards the serious audiophile who wants the IRL (In Real Life) as they say, experience. It features 8 micro balanced armatures, 3-way sound channels, and a 3-way crossover circuit. According to the manufacturer, the 8SH monitor is the best option for music enthusiast and the unparalleled sound insulation immerses the ears totally in the world of music, without any outside interference. The fit and feel of the 8SH is identical to the 8SS and the Comply tips definitely help the isolation heightening the listening experience. As with the 8SS I used WAV files, however, because this IEM is supposedly for the “music enthusiast” I used FLAC files as well because FLAC is the format of choice for most of us. 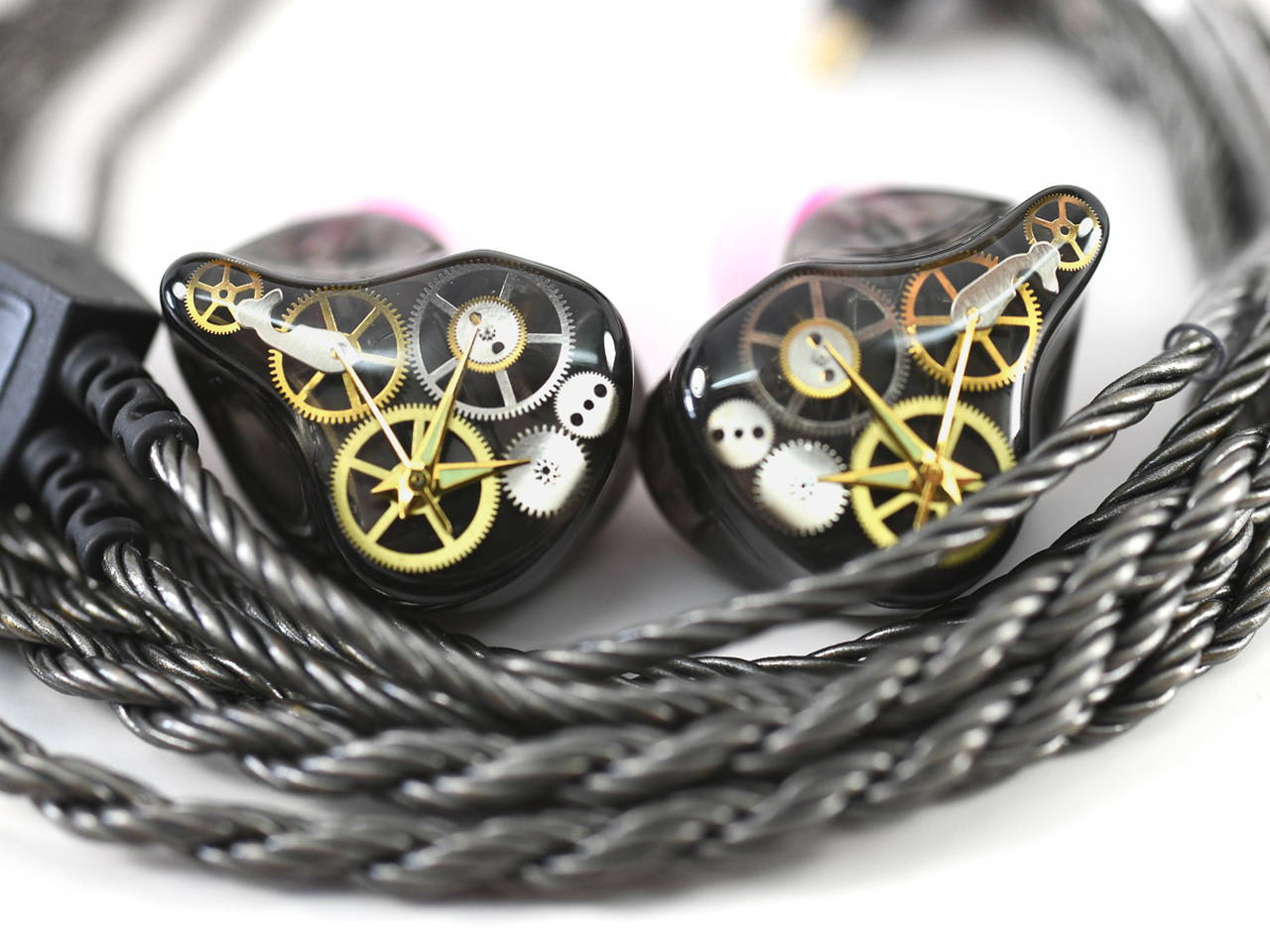 I began testing the 8SH with Jefferson Starships’ “Jane” and was immediately blown away by the crunch of the guitars at the beginning of the song. One can also tell right away that the soundstage of these is wider than the 8SS. The separation of instruments is equal; however, I notice a slightly warmer signature and a beautiful balance of sound from these. Jeff Buckley’s cover of Leonard Cohen’s “Hallelujah” sounded sublime and haunting, as it should. The clarity of the arpeggio guitar notes came through brilliantly and Jeff Buckley’s voice was enveloping. I loved how this song sounded on these IEMs. Next was the Thomson Twins, “Hold Me Now”. There is a lot going on in this song. If you listen to the beginning of the song, there is a myriad of smaller sounds in the background and many IEMs cannot do them all justice. With the 8SH you can not only hear them, but you can hear them on stage left. Amazing. The level of detail and musicality of these has made me smile since I first put them in my ears. The tuning is definitely geared towards a fun, fast, precise flavor. Again, the warmth comes through, but not in a heavy way. The bass is there, it’s present, but not in your face. That, to me, is how bass should be. These are VERY engaging IEMs and QDC has done a fantastic job with the tuning.

Moving on to something a bit different, I put on the Black-Eyed Peas’, “Where is the Love”. WOW. Just wow. The intro bass line mixed with the classical violin’s is amazing! Every nuance of the song was superb. The soundstage felt as if you were there watching them live! The highs were sharp without being intrusive, the mids were pronounced and the bass…perfect. I’m three songs in and I am preferring these to the 8SS. Not that there’s anything wrong with the 8SS, they are made for a specific audience, whereas the 8SH is geared towards people who LOVE music.

I decided to throw some of my favorite heavy metal at the 8SH, and they did not disappoint. First, I played Judas Priest’s, “Living After Midnight”. Then I played the same song by the band Disturbed. I love both and can say without a doubt these IEMs can be used for every genre beautifully. The Judas Priest classic brought back emotion from my youth of hanging out in the cars we built from junkers and drinking beers in the park. The newer version of the song has an immense bass drum intro that just opened the way for the ridiculous slam/crunch of the guitar intro. The imagery here is as if you’re at a rehearsal with them and David Draiman is singing right at you in the empty arena. The solo, which had me using expletives, was phenomenal and balanced.

Many more songs followed in every genre and I have to say that these 8SH monitors live up to what QDC claims.

The comparison between the two IEMs was a lot of fun and I’ll miss them when I send them back home to Moon-Audio. Both monitors are brilliantly tuned by the QDC engineers and are comfortable to wear for hours. While the 8SS were radiant in their cold analytical sound, the 8SH was their bad boy brother. While they both had great clarity, I have to give the win to the 8SH for the bigger soundstage, aggressive tuning and imagery. I preferred the 8SH over the 8SS because I find that analytical listening takes the enjoyment out of it for me. So, are they worth the $1500 price tag? I can say without a doubt, yes. I feel that if you want a true neutral sound that hides nothing except the music file, go for the 8SS. If you prefer an IEM that makes your feet tap and bob your head with your eyes closed, go with the 8SH.