"If it's (the iPhone 7) missing the 3.5mm earphone jack, that's going to tick off a lot of people," Wozniak said.**  We agree, as all headphone owners who want to purchase an iPhone 7 will either need to replace their headphones or purchase an external headphone amp dac.

Woz went on to identify the main problem too.

Bluetooth sound just isn’t there yet.

"I would not use Bluetooth... I don't like wireless. I have cars where you can plug in the music, or go through Bluetooth, and Bluetooth just sounds so flat for the same music." **

Woz used a great example of Bluetooth versus cable sound many know - our cars. When you pair an iPhone or Android to your car you hear Bluetooth’s promise and current shortcomings.

"If there's a Bluetooth 2 that has higher bandwidth and better quality that sounds like real music, I would use it. But we'll see. Apple is good at moving towards the future, and I like to follow that," Woz said.

Woz is right and wrong. He is wrong because we are up to Bluetooth 5***, but he may be right in the aggregate - the 3.5mm jacks days may be numbered. It may seem strange to doubt Apple’s tech leadership or vision, but the company hasn’t been a leader in sound quality. Look at the gymnastics required to listen to Chord’s Mojo on an iPhone.

Chord Electronics didn’t want to pay Apple licensing fees but especially turn over their FPGA Digital to Analog Circuit for Apple to study. Yes, this is part of obtaining Apple MFI certification. Samples must be turned over and cataloged with Apple. Can't blame Chord for not pursuing.

As a result, consumers who love Chord’s Mojo must marry a cable such as our Silver or Black Dragon USB with Apple’s CCK kit. There is no way to directly connect Mojo to an iPhone and hear music. Apple will not MFI certify an “all in one” lightning cable that has the Apple Co-processor chip in the CCK. Believe me, Moon Audio has tried and we will keep trying to convince Apple to let us do so. That being said, if you do have an Apple MFI certified Dac then we do have Apple MFI certified Lightning cables for you to use. No CCK is needed.

We love our Apple gear. We may need an extra Apple CCK cable to hear our Chord Mojo with our iPhone, but so what, the sound is amazing. We are surprised Apple is going jack-less, but we understand their thinking in some ways, as we share in the Lightning Headphones Future is Now (for some) section below.

All headphones are not obsolete if / when Apple removes the headphones jack from their iPhone. Market share statistics bring another interesting debate into view - the future of closed vs open headphone systems.

Stats from Gartner show there are two players in smartphones - Android and Apple’s iOS. With 98.4% of the market and growing, the world uses one or the other of these smartphone operating systems. Android’s operating system and partners such as South Korea’s Samsung and China’s Huawei own 80.7% of the smartphone market.

Apple’s distant second in market share of 17.7% is down from 20% in the previous quarter according to Gartner ****. Quarterly market share numbers show most smartphone listeners will have a 3.5mm jack for some time to come no matter what Apple does with iPhone 7.

It is more accurate to say both platforms, iOS and Android, create frameworks for partners such as Moon-Audio.com to mesh and mashup products and services creating crowdsourced innovation no company could afford alone.

Lightning Headphones - the Future is Now (for some)

Several headphones makers already produce “lightning connector equipped headphones”. Lightning Headphones plugin to Apple’s lightning port via a headphone cable terminated with a lightning plug. The cable or the headphone will also require a Dac and a Headphone Amp now built into it. If the headphones are not battery powered, then power must be drawn from the iPhone.

Part of the reason for the elimination of the headphone jack was to free up space and reduce the power depletion by an internal headphone amp and DAC. However, if the lightning equipped headphone is not battery powered then it once again draws power from the phone. So only time will tell if the point to provide longer battery life really happens.

You will no longer be able to have your phone plugged into an external battery pack or charger while you listen as your headphones now take up the lightning port. I bet nobody has thought of this yet. Therefore, while you blow through your battery listening to your earbuds on a flight, you will have to recharge your phone at some point. The company that produces a portable headphone amp DAC with a long lasting battery that will charge your phone while you play music is going to win BIG.

The next issue is 'headphones with batteries'. Same issue here, as once the battery is depleted in the phone and the headphones, you will now need to charge 2 devices. The headphones might have the ability to charge while you listen via a separate USB plug and we hope you can also charge the phone via this connection. 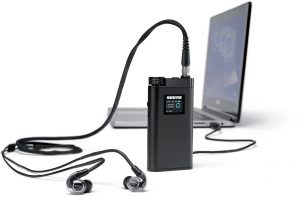 We agree with our customer Erik W. Erik calls Shure’s electrostatic IEMs a “breakthrough in portable audio”. Erik also shares the benefits of Shure’s innovative technology - speed, accuracy and separation (or soundstage) accurately too. Shure’s new IEMs laugh at dynamic range requirements that would falter many IEMs. Electrostatic means Shure’s new earphones push less air and play more music. These are not a direct lightning cable equipped IEM being they are Electrostatic Drivers that require an Electrostatic Headphone Amp. The Amp also contains an Apple certified Dac so a straight Lightning connection from the phone to the device can be easily made. 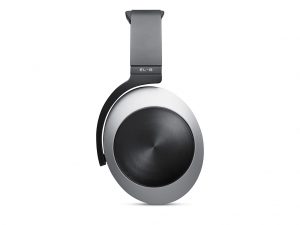 Audeze’s new Neodymium Fluxor magnets bring detail and brightness to their first pair of closed back “lightning” headphones. We like the weight and feel of Audeze’s Titanium too. As one of the less expensive planar magnetic headphones on the market, we recommend Audeze’s EL-8 Titanium to many beginning the high-end audio journey. And the best news is, since Audeze’s EL8 Titanium planar magnetic headphones provide both 3.5mm jack and a Lightening option, you’ll be able to listen to any device even as you live in the future.

The Third option is a smaller version of the EL-8 also including planar magnetic driver technology but in a smaller format. It makes for a very nice travel headphone and on the go solution. The unit folds flat and can be thrown in a small overnight bag. It is a great option with a lightning cable and also one of our recommended headphone "best buys". It also includes a second cable with the 3.5mm plug.

Wireless Headphones While wireless technology, especially Bluetooth, is not there yet in terms of sound quality, it does serve a need. Not being tethered to a cable and still being able to charge your phone while listening at work can be a good thing. And such headsets like the Sennheiser Momentum Wireless have a built-in mic for taking phone calls directly from the phone. It's a great workplace headphone and I imagine, in time, Bluetooth will make leaps and bounds in terms of sound quality. However, removing high-end headphone gear from a premium headphone like the Focal Utopia or "wired headphones", I can't ever see going away.

Moon-Audio.com’s customers search for great sound. No matter what high-end audio gear we sell, there is a single shared limitation - all audio gear is only as good as the musical source. As Shure, Audeze and Sennheiser illustrate, “lightning” headphones and wireless technologies are happening now. The future is lossless.

Increase your music files size and detail and your gear may sound better. More musical detail isn’t a “better sound” guarantee, but all things being equal we’ll opt for more detail over less. We agree with Woz. Bluetooth just isn’t there yet. There are sound quality trade-offs when using most Bluetooth headphones.

Finding great cans you can buy today, such as Shure’s KSE1500, Audeze’s EL-8 Titaniums & Sines as well as the Sennheiser Momentum, will bring the future of music to your ears today.

** Woz to the Australian Financial Review.